SOCIAL CARE IS BROKEN BEYOND REPAIR – SO WHAT SHOULD REPLACE IT? 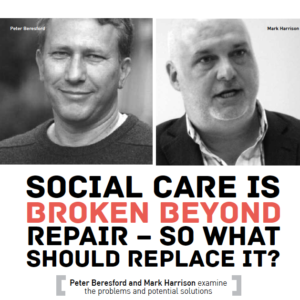 
A RIGHT TO INDEPENDENT LIVING and a universal national independent living service paid for from direct taxation and free at the point of delivery, alongside the NHS, is the only way to solve the social care catastrophe that faces people of all ages in England and Wales.

The government has no credible proposals to offer following the dementia tax debacle during the election campaign. The long awaited Green Paper on social care has been delayed   again   until next May. The panel of expert advisers appointed by government includes no disabled people or disabled people’s user-led organisations in open defiance of the UN disability committee and the Convention on the Rights of Persons with Disabilities. Meanwhile local authorities (LAs) who are responsible for delivering social care face hundreds of £millions more cuts to their budgets over the next four years. This is on top of the near 50% cut already made since 2010. New research from the University of Oxford has linked government cuts in adult social care and health spending to nearly 120,000 ‘excess’ deaths in England since 2010. Most of the deaths were among the over-60s and care home residents.

The situation is so bad LAs are now putting poor people’s personal contributions up so high that they are giving up their social care because they can’t afford it. So, we have the dangerous situation where people who have been assessed as needing care under the mis-named Care Act are losing it because it is too expensive. They are having to make appalling choices like: do I eat and pay my rent, or do I give up my care and independence? How can this be justified in a 21st century advanced western society with any claim to being civilised?

This is happening in Labour-controlled authorities as well as Tory ones. They are choosing to obey Tory austerity policy and financial legislation over their legal duties to disabled and older people under the Care Act. The political choice for elected councillors in austerity Britain in 2017 is whether to break the law. At present the penalties for not meeting legal duties under social care legislation are non-existent while for passing ‘illegal budgets’ they are high.

So LAs pass balanced budgets which result in disabled people becoming prisoners in their own homes, being told to wear nappies overnight because night care is too expensive, or going for days without human contact and ending up in hospital or dying.

We currently have a social care system based on the Poor Law principles of means and needs testing. The bottom line trumps everything. As council budgets are cut, so needs are no longer recognised or met. It is currently estimated that about one million people with social care needs don’t get any support.

Disabled people of all ages are in the process of designing a new vision based on rights and the UN Convention on the Rights of Persons with Disabilities (CRPD). We, the users of social care, are planning a service that will be led by us, not service providers whose main focus has become to meet budget targets (cuts) and ration the care based on neo-liberal ideology – not rights or need. Personalisation policy is dead. The Care Act is as useful as a wet paper bag.

Of an ageing and increasingly disabled population, with a complex mix of health, social care and poverty issues?

We start with the notion that we are disabled not by our impairments or long term health conditions, but by the barriers created in society that prevent us leading full and equal independent lives. This is called the social model of disability.  We are committed   to an inclusive definition of disabled people that includes people experiencing distress, with learning difficulties, long term and life-limiting conditions as well as physical and sensory impairments.

It also recognises the rights and interests of disabled children and disabled parents. From this follows the philosophy of independent living, based not on compensating for people’s ‘dependence’ but instead on making it possible for disabled people to live lives as equal as possible to non-disabled people.

Increasingly the biggest barrier is the rationed, privatised and failing social care system which is being starved of funds. We start from our lived experience – we know what works best for us.

enterprises. It will be for need not profit and will not be means tested. It will be independent of, but sit alongside, the NHS and will be funded from direct taxation. There is a much bigger job to do in helping the NHS move to adopting a social model of disability,  distress and ageing. It will also demand an end to current discriminatory and cruel approaches to ‘welfare reform’ and instead a new independent living based approach.

It will be about independent living in the broadest sense, not just social care and health. It will therefore need to  be located in a cross-government body which can oversee implementation plans, whether it be in transport, education, housing, or social security. This will ensure that independent living is mainstreamed in  every  area of activity, not just ghettoised in the DWP as the Office for Disability Issues is at the moment.

The social care element will need to have its own identity in a national independent living service. This will build on and learn the lessons from the

Independent Living Fund, closed by the coalition government in 2015. It will also learn from the experiences of user-led disabled people’s organisations (DPOs), user-led social enterprises and co-ops which have innovated and developed exciting models of self-organised and self-directed care through personal budgets and peer support. It will work with non-disabled allies who share the critique of the existing system and who work to the social models of disability and distress.

It’s also time we stopped thinking of supporting people to live independent lives as a ‘burden’ and instead as a wealth creator. This was the basis on which the NHS  was  created and   it has  been  shown to  work,  improving the nation’s health, well-being and productivity. We know that a penny- pinching approach to social care funding has disastrously perverse results: it undermines policies for prevention, leaving people’s health and wellbeing to deteriorate at even greater cost to the exchequer (even if we discount the costs to human happiness). We are also seeing its wasteful effects on the NHS, on accident and emergency departments and in so-called bed blocking.

Instead we can see social care as a social and economic generator. Rather than treat its 1.5 million workforce as a marginal pool of low grade, low skilled and low paid workers, we can begin to grow it as jewel in the service industry crown. Such support work could take its place as a source of valued jobs, skills and opportunities. Such employment would create wealth directly as well as indirectly, by providing support to enable people to maximise the quality of their lives and contribution to their communities.

Reconceiving social care in this way – with the primary concern being people’s wellbeing and independent living – also offers the prospect of an economy that is no longer reliant on jobs which robots will be able to do in the future or based on consumerist growth, with all the environmental and social problems these bring in its wake. It would take account of changing demographics and our increasing requirements for support during life’s course. Supporting, maintaining and improving people’s wellbeing would become a central aim of economic activity. Such a needs-based and person-centred approach would value us equally and be concerned with our needs whatever our role – worker, service user or citizen. It would offer the prospect of a truly sustainable and rights- based economy and society.

These early ideas are being developed in conversations initiated by Disabled People Against Cuts (DPAC) and the DPOs in the Reclaiming Our Futures Alliance (ROFA), including Shaping Our Lives. Our demand is that going forward, the dual principles of the disability movement are applied – Nothing About Us, Without

Us and Professionals On Tap, Not On Top!

» Peter Beresford is co-chair of Shaping

Our Lives, the disabled people’s and service users’ organisation and network, and Professor of Citizen Participation at the

a user-led disabled people’s organisation in the East of England, and senior research fellow of Social Action at the University