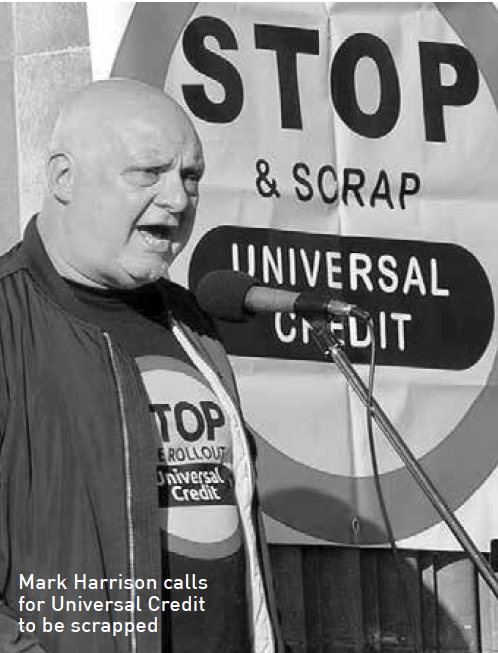 WHEN I WROTE ON UNIVERSAL CREDIT (UC) in the November 2017 issue of Labour Briefing with Julie Kemmy, the early effects of this radical change to benefits were only just beginning to be felt by claimants and disabled people. Twenty months on the picture is becoming clearer.

What has been revealed is that UC is at least as big a threat to those in work as it is to claimants. We can see the much larger and scarier implications of the restructuring of the economy as well as the benefits system under the Tories. Trade unions need to wise up quickly as it is their members who will be hardest hit as UC goes mainstream.

UC is an attack on the organised trade union movement as it is designed to control and sanction millions of workers and claimants. It is designed to facilitate low pay and insecure work and to leave people indebted and fearful. They will then be forced to work on zero-hours contracts for a minimum or below minimum wage for employers who are often the same companies avoiding paying their taxes.

Blair and Brown set up the system of working tax credits to support those in work but in low pay sectors. This was to ensure a sufficient level of income to support them and their families.

Effectively this was a subsidy on low wages and drove incomes and wage levels down. The minimum wage (now misnamed the National Living Wage) is exactly that, although unscrupulous employers always try to find ways to avoid paying even this amount. This is especially true in the gig economy and in sectors such as social care where travel time between appointments in the community is not paid.

Essentially UC is restructuring the labour market and forcing workers to be monitored and controlled by DWP work coaches. Job Centres are now acting as ‘pimps’ for the private sector by forcing people as part of their claimant commitment to work in companies which offer three hour a week contracts and don’t pay the minimum wage. They are also coercing people to become self-employed when they are working exclusively for one company who are determining when they work, for how long and where.

A claimant in Norwich outlines this process.

“After being made redundant I was put onto UC as a job seeker. I applied for over 170 jobs unsuccessfully. Eventually I was offered a job, and although it was a role different to anything I’d done before it was a job ‘I could do’ so I was obliged to take it under pain of sanction. The job was ‘self-employed’ and as such paid below the national minimum wage. My work coach said that this was ‘illegal’ yet still made undertaking it part of my claimant commitment, which I would have to comply with in order to continue to receive UC. “Because the work is so poorly paid, continuing to receive UC is essential in order for me to survive, yet to receive UC I have keep doing the job, bearing in mind it costs me over £100 a month in fares simply to get to it. If the ‘employer’ is acting illegally, as my work coach considered, then is not the DWP abetting a crime by compelling me to do the work? Now I am sure that the ‘employer’ – a large, well known UK firm – has probably checked all the loopholes to make sure that they are not acting illegally by ‘employing’ me as an agent on a self-employed basis even though I have to work at the company premises using the company’s equipment”.

So claimants are forced into self-employment, under threat of sanction, by DWP/UC staff. Self-employed UC claimants are now responsible for their own national insurance and tax and are not able to receive sick or holiday pay while being paid minimum or below minimum wage rates of pay. Workers on low pay and zero-hours, or near zero hours, contracts are being sucked into the UC vortex. Pay is so low in the DWP itself, the department responsible for designing and delivering UC, that the PCS union estimates that around 40% of DWP employees will have to claim UC and therefore potentially be subject to the sanctioning regime. You would then have the bizarre situation of DWP staff sanctioning colleagues in their own organisation.

The rollout of UC has been hit by the crisis in the government and the Tory Party. In October 2018, the then DWP secretary Esther McVey had to get a vote through Parliament to extend the rollout of UC across the country.

This was not going to be won as the surgeries of Tory MPs were full of UC claimants left destitute by the six week (sometimes ten weeks or longer) delay in receiving payments, the dysfunctional loans process and the extra-judicial, pernicious sanctioning processes. So the government pulled the vote but UC is still being rolled out by stealth.

The problem is that claimants are being transferred onto UC through ‘change of circumstances’. This means that people are losing their legacy benefits when their old claims and enhancements are cancelled and the UC claim is treated as a new claim. This leaves claimants thousands of pounds a year worse off.

McVey was forced to admit this could reach £2,400 a year for some people. However, this suits the Treasury as they are saving billions a year while claimants and their children are forced to use food banks. In this crisis they were forced to reduce the wait for money down to five weeks but food bank use continues to rise as the numbers pushed onto UC continues to suck in more new and existing claimants.

Latest DWP secretary Amber Rudd has been robust in defence of UC and is determined to proceed with the managed migration/rollout despite the overwhelming evidence from her own department and government statistics of the harm being caused. In a desperate attempt to detoxify the brand she has shamelessly bought a series of advertorials in the free Metro newspaper at a cost of over £250,000 to the taxpayer, spinning propaganda and lies about the positive effects of UC as journalism.

Disabled People Against Cuts (DPAC) have launched a campaign to dump the Metro DWP lies, with activists up and down the country binning thousands of copies every Wednesday when the advertorials appear.

Evidence has emerged of women being forced into prostitution as a result of the five week delay and low levels of payments for single parents. So-called survival sex was revealed by the Guardian and the Work and Pensions select committee is taking evidence on this.

Philip Alston, the UN Special Rapporteur on Extreme Poverty singled out UC as a major contributing factor in his report on the UK. He said that draconian sanctions and long payment delays are driving claimants into hardship, depression and despair; that the benefit was “fast falling into universal discredit”; and compared the Tories’ welfare policies to the creation of the 19th century workhouses. He said that unless austerity is ended the poorest in the UK faced lives that are “solitary, poor nasty, brutish and short”. He accused ministers of being in a state of denial about the impact of policies, including the rollout of UC, since 2010.

His report highlights the shocking rise in the use of food banks, and rough sleeping, falling life expectancy for some, the decimation of legal aid, the denial of benefits to severely disabled people and the impoverishment of single mothers and people in mental distress.

A landmark study published in November 2017 in the British Medical Journal (BMJ) Open estimated that 120,000 deaths were directly attributable to austerity cuts. The calculation was made that there were 45,000 more deaths in the first four years of austerity 2010-2014. The research calculated that this could rise to 200,000 by the end of 2020 if austerity is not reversed. The researchers from UCL and Cambridge University labelled this as “economic murder”.

UC is also violating women’s rights. According to evidence collected by the Trussell Trust the five week wait can increase the severe financial barriers women face when leaving abusive relationships. Over 50% of survivors said they couldn’t afford to leave as they had restricted access to funds. The single household payment puts women at further risk and vulnerability. Many survivors in women’s refuges face double the wait if they have escaped an abusive relationship without ID and documents needed to make the claim.

Latest figures show half of people receiving UC have had their payments cut by 20% by the government to repay a debt, including advances.

So what now? The Tories are immune to criticism and evidence as seen in their dismissal of the UN report. In my original article I questioned whether UC was May’s Poll Tax. I concluded that it would only be so if Labour and the trade unions mobilised a mass movement to defeat it. This has not happened.

While Corbyn and McDonnell have said a future Labour government would scrap UC, the shadow DWP minister Margaret Greenwood continues to sit on the fence. The TUC has passed a motion to stop and scrap UC, as has the PCS union. However, they have failed to mobilise any extra-parliamentary action, leaving protest at the level of exposing the horrors while failing to hold government to account.

Disabled People Against Cuts (DPAC) and Unite Community are organising actions to stop and scrap UC and we are building a national social movement in the Scrap UC Alliance (www.suca.org. uk), encouraging activists to set up local groups.