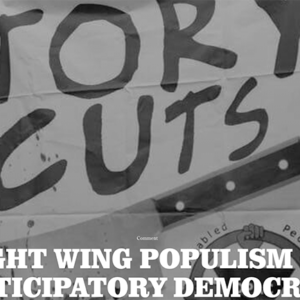 We can expect the inquests about the 2019 UK general election result to go on for a long time yet. According to our personal preferences, we will find all sorts of explanations. Whatever these may be though, the bottom line is that a Conservative government has been re-elected made up of people and policies which have made life more rather than less difficult for most people over the last nine years.

What we also know is that the policies Labour offered, however positive they might seem to many of us and however much we might feel they were in most people’s interests, did not carry the day. Instead of rejecting years of Tory imposed cuts, millions, especially in the North and Midlands, turned to the Tories. The right-wing populism of Johnson carried more political weight than the progressive proposals of Labour.

Having won an election without apparently needing to bother about any of the key issues of our day (unless we see Brexit as one), it looks as though the new government can continue to sidestep most of them, for example, sustainability and the future of the planet; aid and the southern hemisphere, the marginalisation of groups like trans and disabled people, the future of employment, the health and support of an ageing population, etc.

But it would be wrong to confuse voters’ tacit support for such an approach with active allegiance to the Conservative Party. Increasingly in recent years people seem to vote against rather than for parties and politicians. A key issue in this election seems to be the sense that a lot of people have had enough of not having a voice, being ignored and powerless. Ironically that seems to have played best for the political right which since Thatcher’s time, beyond consumerist rhetoric, had increasingly limited the effective say of ordinary people in their daily lives.

Perhaps the real lesson to be learned by left of centre parties and their supporters, in the UK and beyond, is that we are going to have to do things differently. Only left democratisation is likely to counter right-wing populism. More prescriptions for “better policy”, however good or ‘right’ we think they are, certainly don’t seem able to.

The logic is that if we are to secure a better, different kind of politics, then people must begin to have a real sense of reconnection of politics with their lives and some real say in what happens to them. Instead of blaming the electorate, we have got to start changing politics, to make it something people understand, connect with and are encouraged to be part of. The big battle coming will be between right-wing populism and participatory democracy. Any progressive party must now begin to focus on this as the critical underpinning issue.

There are some key areas of social policy to focus on, but within these are some really difficult choices for the Labour Party. We know that a Johnson-led government is going to continue to radically reshape the local and national state along libertarian lines. The shrinking of the state means the continued drive to eradicate any form of welfare from the benefits system, as the Thomas Cook workforce found to its cost. As we have analysed before, Universal Credit (UC) is one of the main weapons in “making work pay” and reducing claimants to below poverty and starvation conditions as a weapon against workers trying to improve pay and conditions.

The knighting of Iain Duncan Smith demonstrates how important UC is to the Tories’ project to reshape the welfare state and how slavish and craven those in our movement are who tried to sell us the line that it was a good idea in principle. The battle to move the party from a position of “pause and fix” to “stop and scrap” was fought and won by our disabled members and Disabled People Against Cuts (DPAC). The battle over UC has only just begun but the challenge for Labour is to organise a social movement along the lines of the anti-Poll Tax rebellion which did for the hated tax and Thatcher. We need a leader who will lead this fight.

If the electorate is to regain trust that Labour can truly represent their interests then we have to walk the walk and not say one thing and do the opposite. In local government this means reassessing the approach advocated to date. The instruction from the leadership not to pass illegal budgets means we have Labour-led local authorities up and down the country carrying out Tory cuts on schools, children’s services, and adult social care and closing Sure Start children’s centres and youth clubs.

A credible path has to be developed that defends vital services from the Tory onslaught. The New Labour line that “our cuts are kinder than Tory ones” does not hold water, as we have seen in Scottish, northern and Midlands constituencies where the Blairite years were an almost seamless continuation of Thatcherism leading to voter cynicism and defections to nationalist and populist parties. The Stalinist inspired “progressive patriotism” is also a slogan devoid of meaning – let’s instead have a real fight to defend services and provision rather than appeasement and slavish obedience to Tory austerity.

While there was much to be commended in the manifesto, the policy on social care was neither transformational nor socialist. The commitment to provide free (excluding residential costs) care for over 65s was tame and reactionary. If implemented, this would not have met any tests of being progressive. It would also have resulted in conflict with the disability movement, progressive social work organisations and the UN as it was in flagrant breach of Article 19 of the Convention on the Rights of Disabled People (CRPD). It would have taken away important rights won by disabled people for choice and control over our care and support. Delivery through a local authority employed workforce for a ‘one size fits all’ service is a 20th century solution and completely inappropriate for today’s setting.

The radicalism of the Green New Deal and the diversity of approach was completely missing in the social care proposals which were more about solving a problem for the NHS than a personalised and bespoke response to ten years of savage cuts.

As the leadership contest gathers pace we will see all sorts of commitments to listen to the electorate and learn lessons. Our fear is that this will just be empty gestures and no real change will occur. Credibility will come through fighting alongside people and communities. Listening is key – but then acting on what is heard is even more important. This means changing the relationship with people in communities. Labour has dipped its toe into community organising and this is one of the ways forward – but it must be based on the principles of rights not charity, solidarity, mutuality and reciprocity. What matters to people in communities are the things that make a difference in their lives.

Unless there is a radical shift in policy then communities will increasingly be trying to defend community facilities which Labour councils are cutting or closing because they are committed to obeying Tory finance laws rather than legal requirements under the Care or Children and Families Acts. This conflict will just deepen the alienation of working-class voters and our party members.

Listening must not be a cynical exercise to win back votes without changing anything – the lessons of Scotland must be analysed and learned if we are not to risk a similar meltdown in England and Wales.

This is not about phoney participation like the Brexit vote but involvement where people have a real chance to be part of the process. It is not about one-off participatory initiatives. Instead, it must be about a new systemic bottom-up approach to involvement that:

Treats diversity with equality;
Works particularly to include those marginalised and excluded by traditional political processes;
Addresses issues of physical, communication and cultural access with equality;
Builds on and learns from existing movements including disabled people’s and service user movements;
Seeks to reconcile representative and participatory elements of the political process.
Challenges inequality and advances social justice.

This is, of course, a long-term project, but it needs to start immediately.